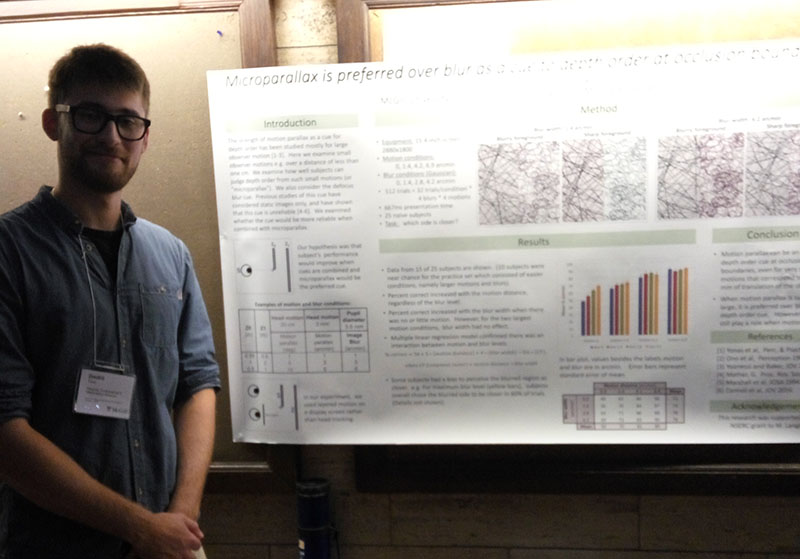 On October 4, 2018, I attended the 14th Annual Faculty of Science Undergraduate Research Conference which took place in McGill’s Arts Building lobby. This event allowed undergraduate students across the Faculty of Science to present and explain their research with the help of a poster. Enthusiasm was running high and the lobby was filled with poster boards and buzzing with the sound of undergrads sharing their discoveries.

I naïvely believed that most students had picked their topic of research based on personal interests. As I spoke to students about their research, I came to realize that while some students were motivated to do research because of interest in a topic, others were motived by the appeal of a particular lab environment or the desire to work with a specific professor. Coming from a liberal arts background, I considered research as a means to an end, when in fact some students were attracted to the process and environment.

For example, Elena Dikaios found a post on one of the McGill Facebook groups seeking students to assist with a research project on the topic of Mindful Eating. She signed up because the topic was one of interest to her, but admitted she enjoyed the lab environment more than she expected she would. She met weekly with participants of the Mindful Eating Program to teach them mindfulness techniques with the goal of helping them develop healthier eating habits and also to lose weight. She felt she was able to connect with participants and enjoyed seeing the positive impact the techniques had on some.

Dmitrii Tiron, a student of Cognitive Science, decided to get more involved in his department through research. Dmitrii got in touch with Professor Michael Langer despite never having interacted with him before. After researching some of his previous work, Dmitrii hoped to assist with any of his current research. Dmitrii ended up working with Professor Langer for a full year researching Microparallax, and plans to continue working with him during the next academic year.

It was uplifting to see Science students excited about following their interests, working within a team and working with an esteemed professor in their field. All the students I spoke with reported enjoying the “real life” implications of their work: research was not just an assignment but also a way to help their field of study progress.

0 comments on “What inspires undergraduate Science students to get involved in research?”