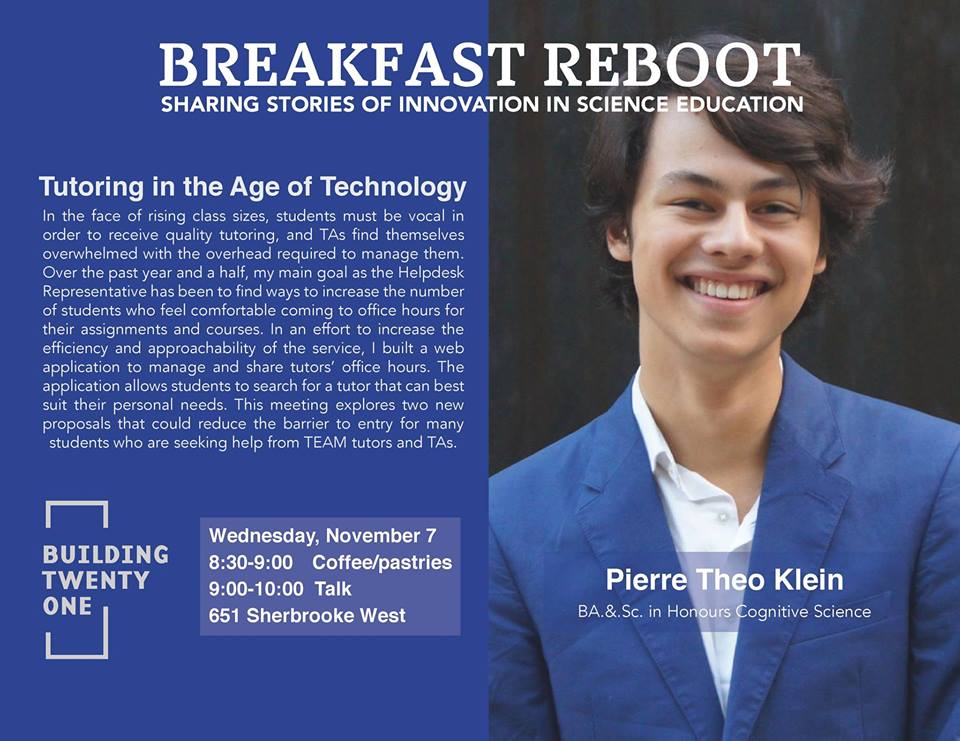 Pierre Theo Klein, an honours student in Cognitive Science described the way he digitized and streamlined the Computer Science Undergraduate Society (CSUS) Helpdesk, touching on the challenges of tutoring in an “Age of Technology” at the November 7, 2018 Breakfast Reboot. Because of his hard work, the Helpdesk went from one or two tutors at a table in a communal space to a team of tutors in a dedicated space with an online schedule.

The CSUS Helpdesk is a volunteer-based peer-to-peer tutoring service for computer science students. Undergraduate students volunteer to tutor their peers in courses they have passed. The Helpdesk is walk-in only, with students working with a tutor if one is available and has passed the course they need help with. When Pierre first started volunteering, he was struck by how inconvenient this was: students looking for tutoring did not know which tutor would be present, what courses they had successfully completed, and the Helpdesk was located in a cramped, loud space. Pierre took on the challenge of improving the Helpdesk. He explained that he obtained funding through the Tomlinson Engagement Award for Mentoring, as well as a budget from the Computer Science Undergraduate Society, and implemented three major changes:

While the changes he implemented have been well received, there are still some challenges Pierre would like to address:

With a view to making yet more improvements to the CSUS Helpdesk, Pierre has created a feedback form to consistently track users’ experience. He also hopes that his peers will continue to improve the Helpdesk after he graduates from McGill.

0 comments on “Breakfast Reboot: How one student improved peer tutoring on campus”